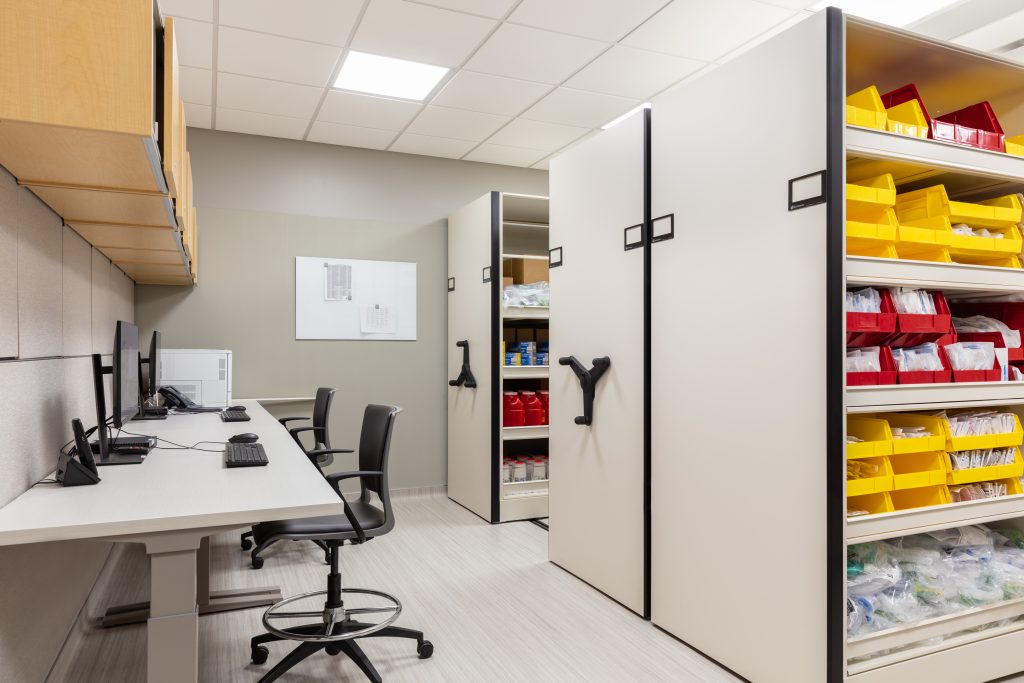 In a healthcare environment, when you need something, you need it quick, clean, controlled, and secure.

Save steps, time, and increase peace of mind with healthcare and hospital storage from Spacesaver®. From the highly modular and adaptable FrameWRX® Storage System to the CoreSTOR® Nurse Server that store supplies inside the patient room while allowing for re-stocking outside, hospital storage solutions from Spacesaver give today’s practitioners increased efficiency, minimized disruptions to patients, reduced risk of hospital-acquired infections, and more time in their day.

In working with numerous healthcare providers throughout Utah, Nevada, Southern Idaho, and San Diego, we have assisted with the development of innovative healthcare storage methodologies. Take a look at a few of our applications below:

First In, First Out Pharmacy Shelving at USH

At the Utah State Hospital located in Provo, the hospital’s Pharmacy Director was excited to move into his new pharmacy—but was disappointed that his existing shelving wouldn’t be making the move because of space constraints. Working with Spacesaver Intermountain, we were able to provide him three additional sections of shelving over the five the pharmacy previously had with a FrameWRX® HD Bin Shelving System.

The director was appreciative of the extra shelving, but he had additional requirements—gravity-fed shelves, the ability to load prescription bottles in the front and back, easy visibility into the storage system, and room for storing bottles of various sizes in the same shelving. We answered by outfitting the FrameWRX® HD system with sloped shelves and dividers in 2” increments to allow for flexibility in bottle size, with a 3” tall acrylic bin front designed to support the bottles and provide visibility into the shelving. These customization led to less errors, maximized space, and easy, fast access to medications. 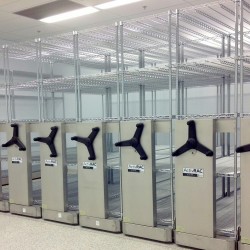 Sterile is the operative word when it comes to hospital sterile storage—but it’s also important to have security and inventory control with any system, too. Spacesaver’s storage systems, such as FrameWRX® Bin Shelving with wire baskets  or ActivRAC® 7M-SS stainless steel high-density mobile shelving are adjustable and configurable to accommodate the changing needs of a hospital and further enhances infection control.

There’s one certainly when it comes to pharmacy storage—it will always change. Our solutions can help you better organize medication supply and security, and improve workflow by giving your staff fast, direct access to medication storage. And, with the flexibility afforded by our FrameWRX® Bin Shelving System, you can easily adapt and update your storage as often as you need. 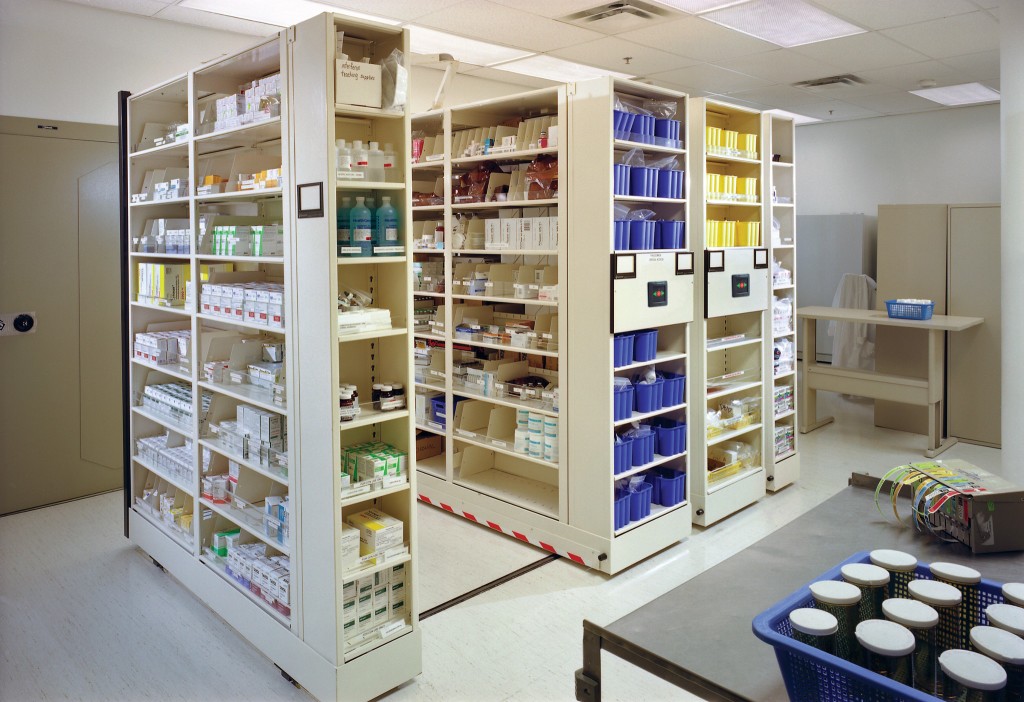 Keeping medical supplies sterile has long been a priority for hospitals, but with the increase of HAI (hospital-acquired infections) in healthcare facilities, it’s become more important than ever—especially when it comes to climate-controlled storage. At the same time, coolers are expensive to purchase and maintain, so maximizing space in these spaces is paramount.

At a hospital in Virginia, a request was made for a mobile storage system that could be used within a walk-in cooler as part of a new lab renovation. Our Spacesaver partner in the Virginia area recommended an ActivRAC® 7M-SS (Stainless Steel)  solution because of the reduced risk to the spread of infection. A dual control was installed at the system for access at both ends—and the result is a hospital cooler space that not only ensures an uncontaminated environment, but a sizable increase in storage space for vaccines, medications, and supplies. 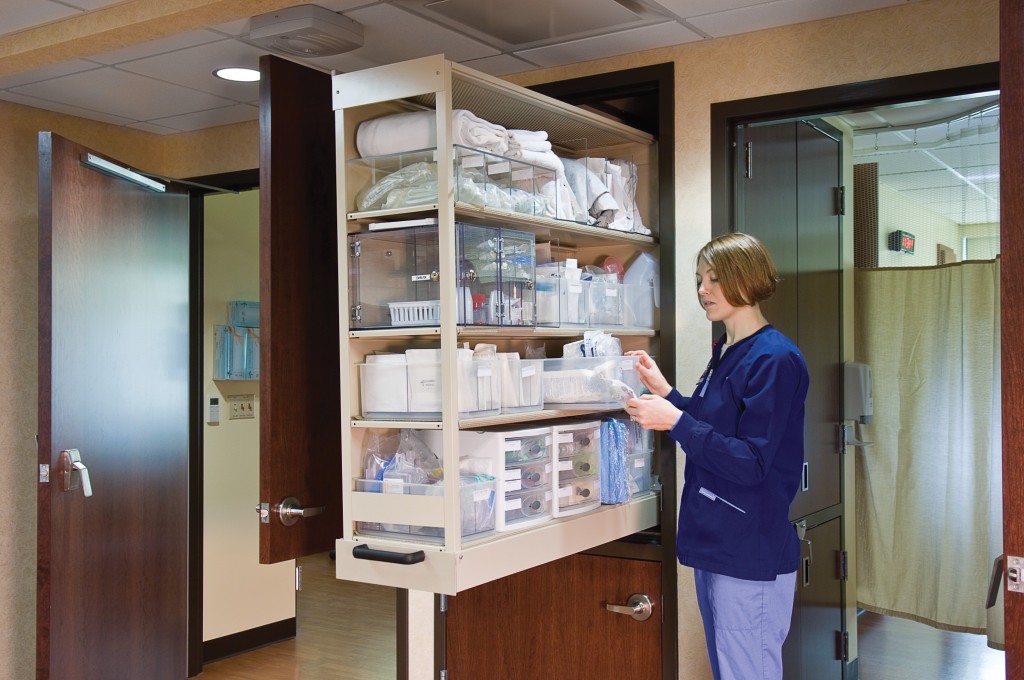 There’s a nursing shortage in the United States—and among active nurses, there’s yet another shortage—time. As the amount of people who have healthcare needs increases, nurses and other healthcare practitioners are spending less time with patients.

Why? Because nurses often don’t have what they need where and when they need it—leading to wasted time and wasted steps looking for supplies and medications. Spacesaver’s CoreSTOR® Patient Server helps improve patient care by providing access to medical supplies from both inside and outside patient rooms—leading to easy stocking, less disruptions, and with supplies right where they need to be, more time for patient care.

Right on hand without counting by hand

Further boost the value of StockBox by combining it with FrameWRX® storage system for flexible, a complete storage and materials management solution.

Our goals are simple. We want to put supplies and materials at your point of need so you can spend less time accessing supplies and information—and more time caring for patients. We invite you to browse the photos of completed projects below that have led us to a true understanding of today’s hospital storage needs and trends. Or, if you’d like to talk with someone about your healthcare and sterile storage challenges, we’re all ears—contact us today.

Spend less time looking for supplies and medications, and more time on what matters—patient care. Download our Healthcare Storage Overview to see how smarter hospital storage can help.